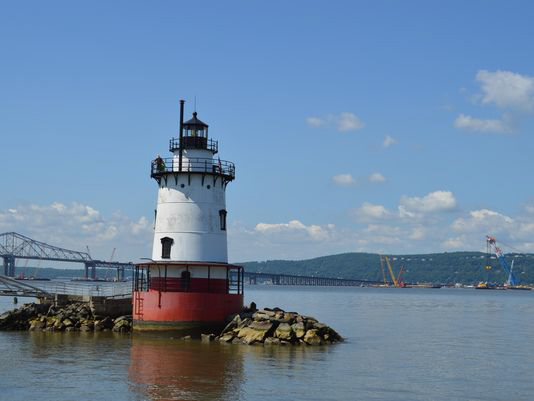 The development plan to rejuvenate the former General Motors Assembly site on the Sleepy Hollow waterfront area has a new name: Edge-on-Hudson.

Developers SunCal and Diversified Realty Advisors are teaming on the $1 billion joint venture, announced in late 2014 by the village and Westchester County.

The development, spread over 65 acres, will include over one thousand condominiums, townhomes and apartments, a hotel, entertainment, retail and office space, and 24 acres of parks and gardens.

Peter Johnson, one of the head developers at SunCal, said that development may begin in late 2015, with buildings being completed as early as 2017.

A ceremony at the site Wednesday to announce the new name also celebrated the “relighting” of the 1883 Lighthouse at Sleepy Hollow, also known as the Kingsland Point Lighthouse, which sits on an island adjacent to the Edge-on-Hudson land. The lighthouse was decommissioned in 1961 after the new Tappan Zee Bridge was built, but remained a notable landmark for the village, and was listed on the National Register of Historic Places in 1979.

An exact replica of the original Fresnel lens was recently installed, along with a light and brass housing. The $35,000 cost came from private funds and grant money. Further renovations are needed to the structure; officials are hopeful the development team will help with the cost.

After the General Motors factory closed in 1996, the land went untouched for nearly two decades, becoming a desolate wasteland of concrete slabs and steel wire fences along the Hudson. The land has since been cleaned up, and the lighthouse has been reauthorized for use by the U.S. Coast Guard.

The development comes as the new Tappan Zee Bridge is being built just to the south of the site.

“The new light signals a new era for the Village of Sleepy Hollow,” said Mayor Ken Wray at the event. “This is a once-in-a hundred-year opportunity for the Village and we’re confident the development will benefit Sleepy Hollow and surrounding communities for years to come.”

“People on the bridge will see that little beacon, and that signifies Sleepy Hollow and Westchester County,” added County Executive Rob Astorino, who also spoke at the event. “It says ‘Welcome to all.'”