RiverWalk Stretches from Sleepy Hollow’s Past to its Future 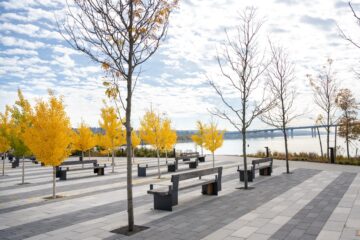 About 100 yards from the Hudson River sits a pile of soil in the middle of a fenced-off construction site. If you drive further through this barren area, you’ll find broken branches, littered fields and more soil.

The hope is that in five years’ time — possibly a bit more — this development will become the hub of life in the quaint village of Sleepy Hollow. Additionally, this comprehensive project plans to open up more public access to the Hudson riverfront, something that has not been possible in more than 100 years.

“Access to the riverfront should be universal,” said David Schroedel, a strategic planning advisor.

But the story of Edge-on-Hudson and Sleepy Hollow Common does not begin in 2022. In fact, one must go all the way back to the 1990s to understand how we got here today.

The construction field currently devoid of any buildings, entertainment or anything of substance was long occupied by the former General Motors plant. The plant closed in 1996, and legal battles ensued. Out of all the legal back-and-forth, perhaps the most important takeaway was that the riverfront would become public property as part of a deal between GM and North Tarrytown (as Sleepy Hollow was named at the time). A local law was crafted that stated if an industrial facility was shut down, it had to be cleaned up better than state and federal standards required. 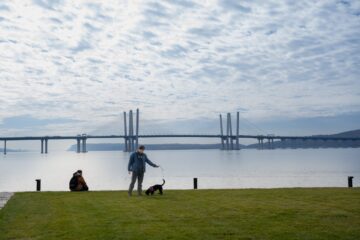 Yet it wasn’t until 2013 that Sleepy Hollow and the village of Tarrytown came to an agreement to move forward with the GM site redevelopment. For years, legal proceedings revolved around a number of issues, namely the negative environmental impact that was a result of GM leaving the site in poor quality. Things got so bad that there were often days when the river would turn a certain color depending on what color cars were being painted that day. GM eventually had to clean the site up, but even then, the ramifications of the company’s departure left a lot to be fulfilled.

When Sleepy Hollow Mayor Ken Wray brought in a top-notch legal counsel from New York City, it paved the way for overturning the site into something positive. Wray had a vision for a large public space that would serve as the center of the village, and now, that is making steps toward coming to fruition.

The first step in making that happen was a design for the RiverWalk. Then-Westchester County Executive Andy Spano was the first to share his hopes for the space.

“[Spano] came to the board of legislators with his idea and told the story of how he was having lunch and the concept arose,” said state Assemblyman Tom Abinati. “He sketched it out on a napkin and showed where the RiverWalk would go along the Hudson River.”

For this phase of the project, steps are being made to repurpose parcels of land along the RiverWalk to make them publicly accessible. While Sleepy Hollow’s portion of the RiverWalk is a major focus of the plan, the park eventually aims to connect the public from New York City to Albany — all along the magnificent Hudson. 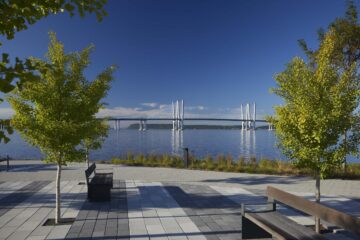 In Sleepy Hollow, visitors are already offered a glimpse into the future of what the RiverWalk will soon become. In late October, the redeveloped multi-use path was officially opened, although Phase Two will begin in 2023. There’s a small strip of the path already complete, with an art mural and a mini-amphitheater supplementing the view of the Mario M. Cuomo Bridge and the Manhattan skyline. Of course, the presence of the construction site kills the mood a bit for now, but the plan in place is for a brighter future for the area. At one point, fences occupied the entire riverfront in Sleepy Hollow, cutting off any access to the river. In fact, this is not even a “reclaiming” of the riverfront as the riverfront property was never accessible to begin with.

“It is the people’s river and people should be able to go enjoy it,” said Abinati.

This especially holds true for Sleepy Hollow, where roughly 15 percent of its population resides below the poverty line. Ease of access to public outdoor space is a huge factor in bridging the gap between socioeconomic classes; the village has a significant upper-middle class neighborhood as well on the opposite side of town. Ultimately, these projects are necessary to incorporate this new neighborhood into the overall village, which is yet another way in which Edge-on-Hudson is a project of building community more than anything else.

On the surface, Sleepy Hollow has two unique projects going on simultaneously: the RiverWalk development and the building up of Sleepy Hollow Common. But in reality, the project takes on a much larger scope. Charles McKinney, design director for this massive project, pointed out that Sleepy Hollow Common will join Devries Park, Kingsland Park, Barnhart Park, Philipsburg Manor, and the Pocantico River into one scenic park.

“It will be at the heart of a continuous trail from the Edge Waterfront park to the Pocantico Hills and the commercial heart of Sleepy Hollow,” McKinney added.

Attracting people from all corners of the state, to various types of greenery and birds as well, the expansive park will also feature the following areas:

A project of this scope is reliant on the many strategic advisors and design professionals who have the expertise in crafting a community space. But this project goes well beyond these folks.

There are also the taxpayers and the people of New York State, who indirectly made this project possible. The $2 million riverfront project is partially funded by a $500,00 state grant, according to the RiverWalk opening’s official press release.

“It takes a Village with vision and a public private partnership to make something like this happen,” said state Senate Majority Leader Andrea Stewart Cousins, on the opening of the new park. “Everybody is going to be able to access this beautiful RiverWalk. It’s going to connect our neighbors, it’s not going to break up neighborhoods.”

Today, the RiverWalk is a sight to behold. A gorgeous park and a gorgeous river, brought together by over 60 acres of developing park space and a community center that will also include over 1,000 living units, a waterfront restaurant, a hotel, a grocery store, and more. The opening of Phase One is a start, but Sleepy Hollow is just beginning its transformation. The village is setting itself up to thrive for years to come, putting future generations of residents into a place where they’ll be motivated to stay and raise families of their own.

The history of this area in a small village along the Hudson has had its fair history of complications. But sometimes, a complicated history serves as a learning experience for moving forward.

Abinati sums this up eloquently: “The history of the trailway takes us from the past into the future.”

All Photos by Margaret Fox