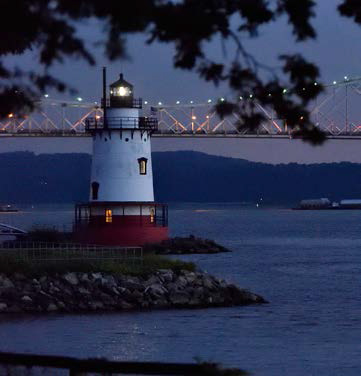 Sleepy Hollow, N.Y. — June 10, 2015 – It’s not often a lighthouse gets a second chance. Constructed in 1883 to warn mariners away from the shoals along the eastern edge of the Hudson River near Kingsland Point (just north of the present-day location of the Tappan Zee Bridge), the Lighthouse at Sleepy Hollow was decommissioned in 1961. Now, as the first step in what is eventually intended to be a full-scale refurbishment of the lighthouse, the Village of Sleepy Hollow and the Westchester County Department of Parks have commissioned and installed an exacting replica of the original fourth-order Fresnel Lens and rotating light that once operated atop the lighthouse.

The new light was dedicated in a June 10 ceremony adjacent to the lighthouse at Edge-On-Hudson, the former General Motors property in Sleepy Hollow set to be transformed in to a mixed-use waterfront development. The dedication ceremony was attended by federal, state, county and village officials, including Westchester County Executive Rob Astorino, Village of Sleepy Hollow Mayor Ken Wray, officials from the United States Coast Guard and the New York State Hudson River Estuary program. A representative of Edge-On-Hudson also spoke during the ceremony, outlining plans for the development and plans for support of local community initiatives.

The approximately $35,000 light, lens and brass housing was purchased with a mix of private funds and grant money and fabricated by Artworks Florida. The 1883 Lighthouse at Sleepy Hollow (also known variously as the Kingsland Point Lighthouse and the Tarrytown Lighthouse) is listed on the National Register of Historic Places and is connected by footbridge to Kingsland Point Park in Sleepy Hollow, NY.

The United States Coast Guard has reauthorized the light as a Private Aid to Navigation, and Westchester County and the Village of Sleepy Hollow are expected to utilize the light, currently powered with solar panels, on selected special occasions until utility services are established through the new Edge-On-Hudson development, at which time continuous nighttime operation of the light will be possible.

In remarks at the dedication ceremony, Ken Wray, Mayor of the Village of Sleepy Hollow, commented, “This new light is a first step towards our intended goal of full restoration of this historic lighthouse. The new light also signals a new era for the Village of Sleepy Hollow, which has been working towards the start of waterfront development at the former General Motors factory site adjacent to the lighthouse, virtually since the factory’s closing in 1996. This is a once-in-a hundred-year opportunity for the Village and we’re confident the development will benefit Sleepy Hollow and surrounding communities for years to come.”

Development is finally set to commence at Edge-On-Hudson, the mixed-use waterfront development on the site. Edge-On-Hudson was among private donors to the new light, and project executives of SunCal, which is developing the waterfront project in a joint venture with Diversified Realty Advisors, also announced that the developer will be the lead sponsor of a new community event called Circus Latino, set to debut at the riverfront property in September 2015.

Located in the Village of Sleepy Hollow in Westchester County, New York, just over 25 miles north of Manhattan, Edge-On-Hudson is designed as a world-class master-planned community encompassing 65 acres on the shore of the Hudson River. The $1 billion project is a joint venture of SunCal and Diversified Realty Advisors. When completed, Edge-On-Hudson will feature 1,177 condominiums, townhomes and apartments, a 140-room boutique hotel, 135,000 square feet of retail space and 35,000 square feet of office/loft space. Set within walking distance of two Metro-North train stations with direct access to Grand Central Terminal, the community will feature 24 acres of parks and gardens as well as a waterfront promenade winding along the river’s edge. Development will proceed as approved in 2011 in three phases, including the Loft District, with a modern-day vision for loft living derived from the site’s industrial heritage, the Central Park District, inspired by Hudson Valley architecture and set in natural landscaping with ample open space, and the Waterfront District, featuring contemporary residential buildings. Site development is expected to begin in late 2015, with construction of the first residences in the Loft District as early as 2017. For more information, visit www.wiredhat.com/proofs/suncal/hudson/wordpress/.