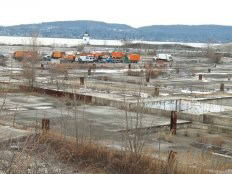 GM’s Sleepy Hollow facility has been closed since 1996. (file photo)

SLEEPY HOLLOW, NY – Village officials report that General Motors has signed a contract with a joint venture of Diversified Realty Advisors of Summit, NJ and the Irvine, CA-based developer SunCal to redevelop the former assembly plant on the  Hudson River shoreline here.

Previous estimates have put the development cost for the mixed-use project known as Lighthouse Landing at about $1 billion. Sleepy Hollow Mayor Kenneth Wray informed village residents of GM’s selection at a Village Board meeting Tuesday night. Wray in a telephone interview with GlobeSt.com says the village was informed of the contract signing by Diversified Realty Advisors in late December. General Motors introduced the mayor to officials from Diversified and SunCal last year, he adds.

Parties involved in the contract were not available for comment at press time. However, Mayor Wray and Village Administrator Anthony Giaccio tell GlobeSt.com that the village expects the automaker to eventually sell the property and the special permit approval for the mixed-use development at the nearly 100-acre site to the Diversified-SunCal joint venture.

The village first approved a special permit for the development on June 7, 2011 that calls for 1,177 housing units, a 140-room hotel, 135,000 square feet of retail space (including a 25,000-square-foot market, an 18,000-square-foot multiplex cinema, 89,000 square feet of shops and restaurants and a 5,000-square-foot restaurant within a hotel) and a 35,000-square-foot office building. However, the special permit approval was frozen while the village contested litigation filed by neighboring Tarrytown over charges that the project would increase traffic in the area. The litigation was settled in September 2013 and the special permit was granted once again by the village. The court settlement freed up General Motors to move forward with its plan to pick a development team for the redevelopment project.

Mayor Wray says, “It is my strong belief” that General Motors will not be part of the development team to build the mixed-use project. The redevelopment of the former plant site has been in discussion almost since the plant closed in 1996. The site had been an automobile manufacturing site since 1899 when The Mobile Company of America (Walker Steamer) and the Maxwell-Briscoe Company began operations there.

Before construction can begin, the development team must secure site plan approval from the village’s Planning Board.

Jonathan D. Stein, foundering partner and co-managing partner of Diversified Realty Advisors, is a former executive with Roseland Property Co., which was the designated developer for the Lighthouse Landing project at the GM site. However, Roseland in late 2007 exited the project due to litigation surrounding the project and issues over the scope of the project between GM and the village. Stein left Roseland shortly thereafter, and later formed Diversified Realty Advisors with fellow founding partner Nicholas Minoia.

“What is great for the village is that Jon Stein is involved in this project,” Mayor Wray says. “He has intimate knowledge of the site, the project and the special permit. That is great because the learning curve is really short.”

The mayor says that GM and the Diversified-SunCal venture are now in due diligence and does not expect any application to come before the Planning Board until March at the earliest. However, he does believe that construction on the venture could begin sometime this year. He notes that a significant amount of infrastructure work will have to be undertaken before work on any of the housing, retail or office uses could get started.