SLEEPY HOLLOW, N.Y., Oct. 31, 2022 /PRNewswire/ — A stunning new park along the Hudson River waterfront is now open to the public. The Sleepy Hollow RiverWalk at Edge-on-Hudson was formally dedicated to the Village of Sleepy Hollow in a ceremony along the waterfront on October 31, attended by State, County, and local officials. The Halloween day ceremony, appropriate for the Village of Sleepy Hollow which has emerged as one of the country’s most popular Halloween Season destinations, was all treat and no trick – as the park restores access to a section of the Hudson River that has been inaccessible to the community for more than a century. Designed by internationally renowned Nelson Byrd Woltz Landscape Architects, the RiverWalk allows visitors to stroll along the waterfront from River Street in Sleepy Hollow as far north as the historic 1883 lighthouse. Phase Two construction of the Sleepy Hollow RiverWalk, which will continue north to Kingsland Point Park, is expected to begin in 2023. A temporary path from the Sleepy Hollow RiverWalk at Edge-on-Hudson to Kingsland Point Park has been established in the meantime. 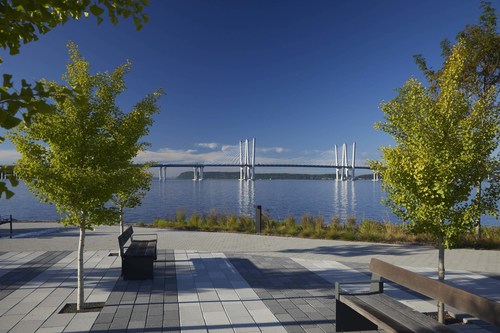 Sleepy Hollow Mayor Ken Wray commented, “This is truly a historic moment for residents of the Village of Sleepy Hollow who have not had access to this section of the Hudson River shoreline for more than 100 years.  We look forward to sharing this new gem with nearby communities and visitors to the region. This new RiverWalk will serve as a gateway to the Hudson Valley and as a welcome new link to our nearby parks, trails and historic attractions.”

The $2 million Sleepy Hollow RiverWalk is a public/private partnership funded by Edge-on-Hudson, a mixed-use, transit-oriented community rising along the waterfront in Sleepy Hollow. The project is supported by a $500,000 Market New York grant from Empire State Development and I LOVE NY/New York State’s Division of Tourism, awarded through the Regional Economic Development Council initiative. Following its dedication, the park is now owned by the Village of Sleepy Hollow.

Empire State Development Vice President and Executive Director of Tourism Ross D. Levi said, “The Hudson Valley is home to some of the most spectacular and picturesque waterfront scenery that welcomes visitors from around the world and encourages guests and residents alike to explore the outdoors. The Sleepy Hollow RiverWalk is the latest addition and will invite even more people to come be a part of it and find what they love along the Hudson River.”

The Sleepy Hollow RiverWalk will be enhanced with adjacent amenities including a waterfront restaurant, a recreation pier, the area’s first waterfront hotel, a DeCicco & Sons Market, and more – as the Edge-on-Hudson development proceeds. Edge-on-Hudson is set to include 1,177 units of housing; a 140-room boutique hotel; 135,000 square feet of retail space and 35,000 square feet of office space, in addition to more than 16 acres of parkland. More than 250 units of housing are already occupied at Edge-on-Hudson, ranging from townhomes and condominium residences to market-rate and affordable housing rental apartments.

Nelson Byrd Woltz‘ design for the first phase of the Sleepy Hollow RiverWalk features two distinct sections of Promenade and Overlook. The Promenade features a path network, inspired by the Fordham Gneiss geology beneath the surface, as well as a series of plazas and lawns. The Overlook offers a rise with amphitheater-style seating and expansive views of the Governor Mario M. Cuomo Bridge and Manhattan skyline to the south, and to Hook Mountain and the scenic cliffs of the Palisades to the north.

Thomas Woltz, Principal, Nelson Byrd Woltz Landscape Architects, said, “This graceful RiverWalk draws on the industrial and ecological history of the Edge-on-Hudson site to afford residents and visitors a variety of experiences – from moments of quiet contemplation to truly exhilarating views across the Hudson River.”

Peter Chavkin, Founder of BREV, commented, “We’re so pleased to open this new park ahead of the original timeline envisioned for the project. We’re grateful to New York State for supporting the construction of the RiverWalk, and for the Village of Sleepy Hollow’s participation in planning, allowing us to accelerate its completion.”

Jonathan Stein, Founder of PCD, added, “This new RiverWalk will be a treasured amenity not only for residents of Edge-on-Hudson, but for residents in Sleepy Hollow, Westchester County and surrounding communities, as well as for visitors from New York City and beyond.”

More information is available at: www.edgeonhudson.com.

Edge-on-Hudson is a mixed-use, transit-oriented community set on nearly 70 acres along the Hudson River waterfront in Sleepy Hollow, NY. One of the most sought-after new developments in the Metro-New York area, Edge-on-Hudson is located just 25 miles north of Manhattan, within walking distance between two Metro-North train stations (Tarrytown and Philipse Manor), affording express access to Grand Central Terminal in just 37 minutes. New York City-based Biddle Real Estate Ventures and New Providence, New Jersey-based PCD Development are the master developers. Edge-on-Hudson is set to include 1,177 units of housing; a 140-room boutique hotel; 135,000 square feet of retail space and 35,000 square feet of office space, in addition to more than 16 acres of parkland, restoring access to the waterfront in Sleepy Hollow. More information is available at: www.edgeonhudson.com.

Nelson Byrd Woltz (NBW) is an internationally recognized landscape architecture firm with studios in New York City, Charlottesville VA, and Houston, TX. NBW has been entrusted with the design of significant public parks and cultural institutions in the United States, Canada, and the world, placing decades of construction and design innovation in greater service to the public realm. The firm has been recognized with over 100 awards within the past 10 years, including the prestigious Amanda Burden Public Open Space Award for Citygarden in St. Louis MO.  Recent and current projects include the Hudson Yards Public Plaza in Manhattan, the 1500-acre Memorial Park in Houston, the John and Alice Coltrane Home on Long Island. The work of the firm has been featured in numerous national and international publications including the NY Times and Wall Street Journal and is the subject of a monograph published by Princeton Architectural Press. www.nbwla.com

The Village of Sleepy Hollow is located along the eastern shore of the Hudson River in Westchester County, NY. Home to approximately 10,000 residents, the Village includes a remarkable mix of historic landmarks, parkland, diverse neighborhoods and thriving businesses, including the award-winning Phelps Hospital Northwell Health. Originally settled by the Lenape Native Americans, Dutch immigrants began to arrive in the 17th century and a portion of the area became known as “Slapers Haven,” (roughly translated as “Sleepy Harbor” or later, “Sleepy Hollow“). The Village, bordered by Tarrytown to the south, was incorporated as North Tarrytown in 1874. In 1996, local residents approved a referendum changing the Village’s name to Sleepy Hollow, returning the Village closer to its historic origins. The name also honored the legacy of Washington Irving’s famous short story, “The Legend of Sleepy Hollow,” a fictional tale that nonetheless featured actual local landmarks that survive in the Village to this day, Including the Old Dutch Church of Sleepy Hollow, built in 1697. Today, the Village is proud to be an ethnically diverse and welcoming community. It is poised for continued growth with development of the Sleepy Hollow Common, which will offer public space and amenities in the heart of downtown, and redevelopment of the former General Motors Assembly Plant site along the Hudson River as Edge-on-Hudson, a mixed-use transit-oriented community. More information is available at www.sleepyhollowny.gov.